One day following a lecture on Confucius, a student came up and asked me if he was a real person. I guess he was as real as Jesus Christ, I replied and much older. She thought that Confucius was a mythical figure. He certainly is not a mythical figure. He is still very much alive in fact in terms of the influence of his teachings. They affected billions of people from the Chopstick culture for thousands of years. Even today, the Confucianist ethic is the conscious and often subconscious motivation that drives many Chinese (and Japanese, Koreans, and Vietnamese) Confucius was born in 551BC and died around 479BC. His major teachings are found in four books: The Analects, Book of Poetry, Book of Rites and the I Ching (Book of Change). The authorship of these books is open to dispute. Some claim that Confucius wrote them himself 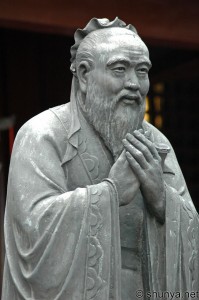 However, given that he often claimed that he was not the originator of culture but its transmitter, I suspect that he reinterpreted some of the ideas passed down from his ancestors who were most likely a mixture of animists and what is known today as Taoists, people who follow the teachings of Lao Tse. Confucius thought Lao Tse was the wisest man he knew. When Buddhism was introduced to China, the Chinese adopted it into their system of spiritual beliefs quite readily. Today in most of Asia, when a Chinese says s/he is a Buddhist, you can be sure there are elements of Confucianism and Taoism in their worldview. So, when pondering on what makes the Chinese tick, you must note that three major spiritual forces: Confucianism, Taoism and Buddhism have blended in an inexplicable way to mould them.

CONFUCIUS SAID: To be fond of learning is near to wisdom; to practise with vigour is near to benevolence; and to be conscious of shame is near to fortitude. He who knows these three things knows how to cultivate his own character.