The Tao or the Way is the totality of life and death for Chinese. It forms a substratum of their conscious and unconscious culture thus shaping their psyche in ways so profound that words are sometimes rendered useless to describe the phenomena. The Tao is found in many different manifestations and nowhere is it more beautifully displayed than in the health system of the Chinese. To the Taoists, health, life and sex are interwoven so intricately that whatever we put into our mouths also determine our sex life. Conversely whatever we do to our sex life also determines the length and breath of our life. There is no doubt that the Taoists view life through a wholistic paradigm unlike the Judaeo-Christian view which is dualistic. Through the lenses of a wholistic worldview, everything in the universe is interconnected. Hence everything a human being does is interconnected: body, mind and spirit. This interconnected-ness extends naturally to the relationships we form with humans and animals. It is the invisible chi that connects us to everything and everyone in the universe. In forming human relationships we are involved socially and sexually with others. It is in these activities that what we put in our mouths and our sex life form a cobweb of chi that determines our longetivity. Taoists view sexual relations between male and female as the primary earthly manifestation of the universal principles of Yin and Yang. The Chinese following yin yang philosophy see sex to be a natural and indispensable thread running through our health and longevity. Ancient Taoist physicians examined life and nature and all that is linked with them and recorded carefully their findings in journals and books, fortunately some of which are still around and even better, translated into English. Of these, perhaps the most famous is the Yellow Emperor’s Classic of Internal Medicine (Huang Ti Nei Ching) and The Classic of the Plain Girl (Su Nu Ching). Both of these date from the third-fourth centuries BC. Some hints from the Yellow Emperor regarding sexual prowess are interesting contrasts to the western notion of sex. For males, it is important to master the retention of semen during sexual intercourse. Preserving semen is crucial in the practice of Taoist bedroom arts. In Pien Chang’s biography, dynastic history of the later Han, he said:

“The art of the bedroom consists of suppressing emissions, absorbing the woman’s fluids, and making semen return to strengthen the brain, thereby attaining longevity.” 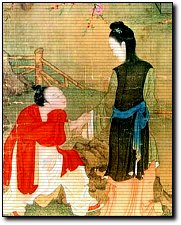 So what is the purpose of this apparently Herculean task? A man who has mastered ejaculation control will experience an overwhelming enhancement in his love for his woman and will be able to make love over and over again. Presumably with the same woman on the same occasion. More related to overall health, ejaculation control certainly benefits the man insofar as he is constantly being rejuvenated, hair loss is reduced, his complexion improves and his culinary appetites are wholesome. This in turn spills to his general health and fitness. Hence his life may be prolonged because he feels good and happy.

Good luck to all of you who are inspired to practise the yin and yang of sex!!!!