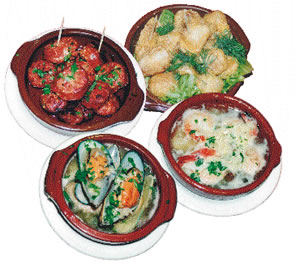 Hola amigos, amicas or ni hao xiao peng yu. Spanish is as far away as I can get from being Chinese, culturally speaking that is. Yet ironical as it may seem, we got off the plane in Barcelona, into a bus and before we knew it, we were in the city centre in the midst of shops sprouting Chinese names such as Du Hua, Tian Tian, Xing Xing and it was a total surprise. Where have all the Chinese gone? I was tempted to sing a la the old Marlene Dietrich. Barcelona, of course, where else? So many Chinese but no yum cha. So off we went for the tapas instead.

Tapas is a Spanish version of yum cha for those of you who are yet to sample it. One can walk into any café or bar in Spain and point out all these tiny goodies – chorizos (small sausages) on slices of bread, olives, black, brown or green, all skewed together, cheese and pigeon eggs, tuna mix artistically, designed looking like miniature architects’ fantasies – one can just eat and eat all day and never wish for a main course. Such are the delights of tapas. Perish the thought of a yum cha on a fine Spring day in Spain. Especially if the tapas are topped with almost a topless senorita or senor. After three days of tapas, my Chinese tummy makes ethnocentric growls which rapidly turn into roars for a good authentic Chinese meal. When in Spain, do like the Chinese ( forget all that stuff about when in Rome do as the Romans do). A long time ago, I wrote an article on the Chinese diaspora exploring how Chinese food (wherever I found it) took on a local flavour – in Spain it is the same. The Chinese food has the flavour of tapas. Their fried rice tastes and feels more like paella, a Spanish dish of rice and whatever goes – seafood, sausages or other meat, etc., So much for my real Chinese food. 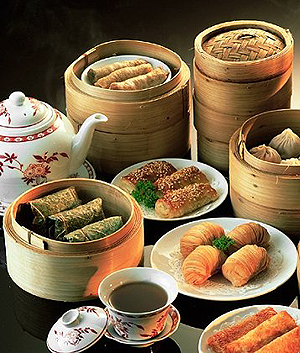 After my stomach was full, my mind turned to higher things – study of the Spanish language. After all, apart from English and Chinese, Spanish is the most commonly spoken language in the world. At first I wondered why – seeing that there are not that many Spaniards around, but roaming over to South America and Central America including Mexico, hola! hola! – the Spaniards did colonise a lot of people. I really prefer the Italians personally as they did not inflict their cruelties on so many peoples. But then we must not forget the Romans. They were Italians too and they did crucify a lot of Jews including a very well known One. I am sad to report that my study of the Spanish language did not travel far as I got diverted by the topic of Spanish colonialisation and its parallels with the British conquest of the Far East. What I did find out to my delight is that Chinese is much easier than Spanish because the latter is full of gender issues like German and French. Even tables and chairs, fruits and nuts, coffee and tea have to be appropriately prefixed with their genders – male, female or neuter. Chinese do not even bother with he/him, she/her, it – all sound the same i.e. ta. Easy. Very flexible in Mandarin, ta can be anyone really except you and me. My Spanish affair is coming to an end now as far as the tapas and lingo are concerned for tomorrow or mana we spread our wings towards Lisbon and Casablanca and bid adious to the senoritas and senors.