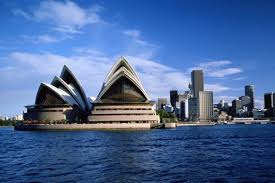 To be in Sydney is to be in a foreign country if you had just arrived from Melbourne! I landed in Sydney a day before Chinese New Year a few years ago! The sun was blinding and the air was thick with promises of a hot summer night on its way! Staying in Sydney’s Chinatown is a wondrous feeling – fire crackers, smells of roast ducks and char siew, beautiful Chinese girls exposing midriffs and a sliver of swaying hip and awesome Chunks (read Chinese hunks) – it must be a foreign country, Can’t be Australia, not even, Little Burke Street in Melbourne. Sydney! Sydney!

There I was trying to employ more teachers for our classes. They are all young women from mainland China. I appointed Shu Yi immediately when she answered: SKY to my question: Why do you want to live in Australia? That was the most original reply to this question of mine at every interview. More than originality, it was a poetic answer and I understood immediately and profoundly what she meant by that one word. The sky in Sydney is different from all the big cities of China. Here in Australia, it is blue, specks of white cloud, little sailing ships cruising across our very eyes. It always makes me want to reach up and touch them. Shu Yi, in her mid twenties, would have been born and grown up in a China that may never see clear blue sky in her big cities. In 1994, when I was in Beijing, I already knew that a whole generation of Chinese may never see blue skies in Beijing. Back there recently, I gazed out of my hotel room and knew that I was right. The desire to see the sky is what keeps Shu Yi in Australia as she completes her post graduate studies and is now teaching at our Chinese classes!

Iris Huang is also part of our teaching team in Sydney. Iris is an accountant by training but her heart is so big that she needs to fill it with Australian students instead of just numbers. She and Shu Yi are also Cantonese speaking. With Iris and Shu Yi, are Jocelyn and Shen. So in Sydney, we have four teachers all trained in Accelerated Learning techniques in a very accelerated manner seeing I had only two weeks there! Well, nothing is impossible in my book. These young teachers are bright in looks, spirit and mind. It is heart warming to train them.

Meeting the students in Sydney is good fun! Sitting in their classes and listening to them speak in Mandarin reminded me of ACCS Melbourne twelve years ago. At that time, I had felt that Chinese languages/dialects and culture would one day be a necessity for many Australians as they go there to work in China and have fun. Today, watching the number of Australians wanting to learn Chinese is gratifying. I am so happy that in spite of the challenges, we have kept ACCS open. I truly believe that learning their language is the best way to forge bonds with other human beings different from us. Learning English was really hard for a lot of us Chinese and even today, I still speak and write English with terrible and terrifying mistakes! (By simply changing the preposition “of” to “off”, I can offend so easily an Australian friend). Nevertheless, had I not been able to speak English well, my life would have been rather impoverished as I struggle to live in Australia. (And to make things even harder, I am often told that Australians don’t speak English!) Watching our teachers in class, my heart bleeds for them as they struggle at times to speak English, to tell the stories dramatically in tune with the largo music. Their voices are loud and strong for they are Chinese after all, yet in their eyes, I see a fleeting fear, maybe a shyness, simply because they think that their English may not be good enough to be understood by their Aussie students. Then I let my eyes scan the faces of the students, and this time, my heart opens wide for the kind understanding and tolerance I see shining from their eyes. And patience. Yes, as they attempt to understand our teachers’ communication styles, their weird and wonderful pronunciations of the English words. So in a moment eternal and universal, hearts bond, eyes meet across the classroom, and in that wonderful, wonderful moment, a language of knowingness, a dialect of silence, speaks louder than words, forging understanding and a kind of humanity that transcends our differences.

In that two weeks in Sydney, feeling as if I was in a foreign country, walking the streets late at night after classes, getting lost for I have no sense of direction, eating unhealthy food, fighting through crowds of tourists, taking public transport and taxis with horrendously rude cab drivers with foreign accents, I had a sense of isolation sometimes, a homesickness for Melbourne assailed me, but as always, when my feelings go to a place of darkness, the Force of love and light shines upon my brow – two women students, Pollyanna and Wendy from Melbourne. They smiled and told me that they were originally from Melbourne’s ACCS. That was enough to forge an instant bonding between Pollyana and me for Argentinian tango if not Chinese grammar, When Wendy walked into class for the first time, there was a rush of energy from me to her and I had thought then that I knew her! The second week when we talked, we discovered we had met or rather she had seen me ‘performed’ over ten years ago! Ah, it was good to have two friends from Melbourne. Just like a friend, Wendy rang the night before I left for Melbourne and invited me to breakfast at a business brekkie in Sydney where I would meet people and make good guanxi in Sydney.  How kind she was. But I was needed in Melbourne and I need to be home in Melbourne by the sea, for the blue sky of Brighton.

3 responses to “Sydney! Sydney! Oh, What A Chinese Feeling!”