‘Our Man In Beijing’ In Malaysia 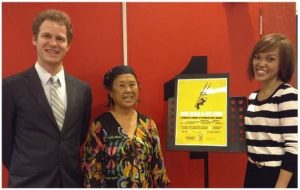 Opening night in Penang was stunningly revealing for me! The audience which was made up of 90 percent Chinese laughed at all the lines to do with Chinese when Mei Ling said in response to John Williams’ wish to return a favour immediately:   “We Chinese take three generations to pay back favours.” I saw that my play is hugely successful for a Chinese audience. Our past two seasons in Melbourne with predominantly Australian audiences, they laughed at the Aussie references, but in Penang, the Chinese roared with laughter at themselves.  Can you imagine how I felt as the author of this intercultural play, the first in the world to introduce white Anglo Aussie and Chinese values in a play? And to think this topic all began as a classroom lesson for our students at ACCS. On opening night in Penang, many of the Malaysians in our audience were people who had lived in Melbourne. A very heartwarming comment came from a Chinese Australian gentleman, now living in Penang. He said: “I know where Castlemaine is. The play is funny as we understand all the jokes seeing that we have lived in both countries.”  Even as I shook his hand, I was thinking: “Another global gypsy like me, living in two, if not three countries, and homeless yet is at home everywhere.” 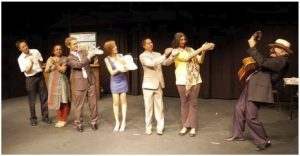 Taking an Australian cast and crew, all 9 of us from Melbourne, joined by Alan Ramm, a long lost cousin from the UK and collaborating with our Malaysian cast and crew….WOW! What an entourage we were traveling from Kuala Lumpur to Langkawi, Penang and back to KL where we performed before a very different audience from Penang.  The three performances were brilliant. The cast and crew seemed to have overcome their jetlag, their initial excitement of shopping, and sightseeing and put on stellar performances in spite of the fact that something nearly went horribly wrong.  John Williams could not get the briefcase to open in one scene so he had to improvise. As I watched him improvised, I had to laugh and cry at the same time (cry because I knew the director in the wing was having a heart attack like I was had I not watched in accelerating fascination how Ashley Macklin who played John Williams was writing and acting his own script there for a few minutes).

A memorable journey was made from Penang to KL because we had props such as our bar which is one metre by 1.8 metre made in Penang by a local carpenter, could not be flown with the cast and crew. Flight abandoned and all of us piled into a mini van and drove from Penang to KL, stopping in Ipoh, my hometown for lunch and a quick dash into the famous cave temples of the Taoist-Buddhist monks and nuns for photos and feeding tortoises. I noted that the tortoises that I had fed when I was a teenager had not only grown up but grown old just like me! Tortoises symbolize longevity hence Taoist Buddhists keep them. Cast and crew fed them with ‘kangkong’ or what is called ‘swamp vegetables’ up north in Darwin.  When our last performance in KL was over, we spent the next day at an elephant sanctuary. This elephant sanctuary rescued baby elephants that had lost their parents to poachers and nurtured them and train them to be rescuers. Started by a local Malay man 20 years ago, he is known as the ‘elephant man.’ Elephant man talked about his elephants like they are his friends and family. His elephants are all known by names. It was an educational tour about elephants, poachers, indigenous people of Malaysia and, above all, a great lesson about human greed and corrupted capitalists, and for me, a  deep sadness about some Chinese people. It is they who are creating and maintaining a demand for these elephants; killing them for ivory, skins, and their meat, etc. To be Chinese these days is not an entirely happy affair for we are fast gaining a reputation for being murderers and all things bad, but hope springs eternal in the human breast… with education about wild life one day poaching these beautiful creatures will end. For my cast and crew of Our Man in Beijing, the day with the baby elephants was the highlight of their three-week tour. For me the successful tour re-affirms for me once more, that managing human diversity is a challenge that cannot be taken for granted. It needs patience, skills and above all, a loving understanding that we are all humans and not yet divine. The struggle to be a perfect human according to Confucius needs the cultivation of a moral character and mastery of the arts including the performing arts.  I have a long way to go….

4 responses to “‘Our Man In Beijing’ In Malaysia”