Ni Hao Xiao Bao Bao, why are you studying Chinese? 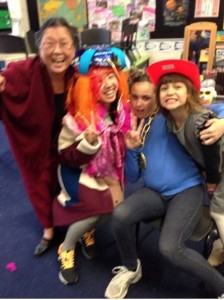 This Term I started the Chinese classes for kids with the help of another grandmother, Olga Piscioneri. I have come full circle. Almost 20 years ago I founded ACCS in 1993, then exited from ACCS when my husband died thirteen years ago. Now in 2014 I returned to ACCS and started working again at the ripe old age of 70! I have come full circle in my mission to promote Chinese language and culture in Australia.

Our children’s class for 7-12 years old began at Merri Creek Primary School in July this year. All these children are from White Anglo /European backgrounds and not one of them was even half Chinese. I am delighted. But at the same time, sad. In an era where China has become a superpower and Australia’s critical trading partner, not many schools in Australia are offering Chinese as a second language. Bilingual schools in English and Chinese are still very few in Victoria as my cursory research had shown me. I am sure the same picture is true of Australia as a whole. But, let me not detour into a tirade about the educational system in Australia. Instead, let me dwell on our students and teachers.

I wanted to know why the children are doing Chinese so I asked them. Their answers: from the younger ones (aged 6 to 8 year old year olds ) my sister is doing Chinese, my mum wants me to, I like Chinese food, I like dumplings, I learnt Chinese before, we had lived in China, and finally from an 11 year old: I want to learn Chinese because I want to continue studying it in high school. Why? I asked. Because I want to travel and work so I think Chinese will be useful. How about that? From an 11 year old. I listened to him and watched his body language. He meant it. Sure he was told this message about studying Chinese but his body language and his eyes showed me that he believed in what he was told.

I could not help smiling at the culture shock of our teachers when they took their first class. They had expected that their students would sit quietly and listen to them as in a classroom of Chinese students back home in China. But our Aussie kids were much more active. They walked around, they went from one spot to another, and they slumped over their desks. In short, they were kids who were not used to sitting still. Australian kids, when compared to Chinese kids of my generation, learn in a more kinesthetic manner. They learn through doing and like to engage in more physical activities when learning. 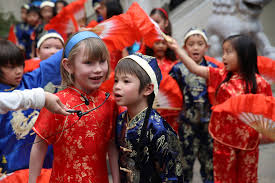 Our Chinese teachers managed their culture shock pretty well as I had already given them information about the differences between Australian and Chinese students. As they were also trained in Accelerated learning principles and had designed their lesson plans using more kinesthetic exercises like story telling and games, the students were never bored. It was good to hear the students said that they enjoyed their first class. Enjoyment should be intrinsic in an AL lesson plan as this is a key motivator to learning. It is my intention that the children should enjoy their Chinese lessons and find joy in these. In the years that I have been an educator, I have often heard the lament from adults who told me that they had wished they had enjoyed their Chinese classes as children. Their memories of Chinese classes were that they were painful and boring so they never learnt Chinese. Now as adults, they wished they had learnt the language. It was also my own personal experience! As a child, I had learnt Chinese in this painful way, and it did destroy something in me as a learner. I leave you, readers with a quote from Krishnamurti, a great Indian philosopher and teacher. In his book Education and the Significance of Life, he wrote: ” What is the good of learning if in the process of learning we are destroying ourselves?” Precious little children, xiao bao bao, may you always learn with joy! In joy, you will grow your life! That is the reason for learning Chinese, as in learning any other subject, to discover the joy of life.

One response to “Ni Hao Xiao Bao Bao, why are you studying Chinese?”