I know everyone is thinking how hard it is to learn Chinese. The writing is like squirrels gone nuts and its tones are like the sound of music without Julie Andrews. Who needs it? I mean to say why bother learning the Chinese language? Just eat the food. Yes, wouldn’t it be nice just to eat Chinese food and magically like Dr Fu Manchu…. waaaaaaaaah you can speak Chinese Mandarin. That would be nice indeed.

But there are side benefits from learning a language like Chinese as it is visual, auditory and kinestheic. VAK! How Vaki is Chinese? Chinese characters are little pictures that become ideograms. By simply staring at a picture, for example, the character for human, you are exercising your visual memory. Then spoken Chinese, Mandarin has 5 tones, one of which is neutral. How about that? Learning to listen to Mandarin improves your musical ear. Then the writing itself cannot help but enhance your kinesthetic ability. Unlike the Western alphabet, Chinese writing is kind of like drawing a picture with its dots, dashes and strokes. Just like the movements of Taichi or Qigong! 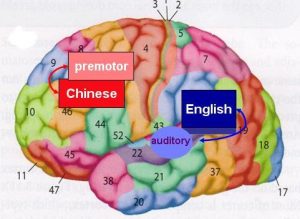 Recent research suggests that using your brain to struggle enables it to form new neural paths. In short, your brain gets younger as you grow wrinkles.

Secondly, you get to learn about a new pedagogy called Accelerated Learning. Accelerated Learning is a wholistic model and an approach to your life. Yes, your life, not just a tiny bit of you but the whole of you, warts and all? From the food you eat to the (s)exercise you do. (I managed to sneak that in). The Tao of Sex from the viewpoint of the ancient Chinese masters had always been an emphasis on the connection between food and sex. Now you know why Chinese culture places so much emphasis on their cuisines. You are what you eat, in short.

So do not just learn the Chinese language alone but while you are at it, learn the culture as well.

Culture is bigger than language itself. Sociologically speaking, it is the total way of life of a group of people. If you want to connect with someone who is Chinese, for whatever reason, apart from speaking with them in their own language, also get to know their culture. Culture shapes them like it does you. So, baby, if you want to tango with them, manage each other values, likes and dislikes. Learn their culture.