The Tao Te Ching is translated as ‘The Classic Book of Integrity and the Way’ by Victor Mair, a wonderful Chinese scholar of the Tao. Next to the Bible and the Hindu Bhagavad Gita, the Tao Te Ching is the most translated book in the world, according to Mair. He also pointed out that over a hundred different renditions of the Taoist classic have been made into English alone. The Tao Te Ching is considered by most scholars to be the fundamental text of philosophical and mystical/religious Taoism. Its authors is popularly said to be Lao Zi, but closer to the truth, is the fact that it was written by a number of people over a period of three centuries (circa 650-350 B.C.)

The Tao or the Way defies definition. Indeed, according to the Tao Te Ching, when the Tao is defined, it ceases to be the Tao. Translated into English, the Way is usually accepted as one meaning. But the Way should be taken to be a higher source or the Universe, not a method in the concrete sense. Some would equate it to God or Godot in Samual Beckett’s play Waiting for Godot. The Tao, in other words can be taken in many ways, for many reasons, by different people. Perhaps the most profound is provided by Mair. He sees the Tao as the all pervading, self existent, eternal cosmic unity the source from which all created things emanate and to which they all return. 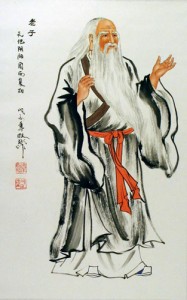 The Tao Te Ching is also popularly known amongst traditional Chinese as the Classic of Five thousand characters. It is very condensed and many of its proverbial sayings filled with wisdom are paradoxical, and require deep contemplation to work out. Note for example the following;

The ways that can be walked are not the eternal Way

The names that can be named are not the eternal name

The nameless is the origin of the myriad creatures

The named is the mother of the myriad creatures

Always be without desire

in order to observe its wondrous subtleties

so that you may observe its manifestations.

Both of these derive from the same source

They have different names but the same designation.

The gate of all wonders!

Perhaps a few moments or even days of contemplation may give us a glimmer of the wisdom of these words. Ponder on the paradoxical nature of these words and the world we live in. May your meditations be deep and silent and may they yield the blue pearl of wisdom and truth.

One response to “Lao Zi and the Tao Te Ching”