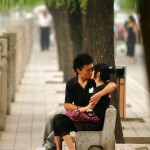 When I was a little girl, my mother would take us to the afternoon matinee in cinemas in Malaya (before it became Malaysia) in the early 50’s. In these movies, for the first time I saw people kissing each other…. but I never saw my parents show any physical attention to each other, let alone kiss! As I grew older I often wonder whether or not Chinese kiss each other like the movies stars.

Then I came to Australia. My first cross-cultural drama and trauma in Australia was being kissed by a Mr. Day, a geology lecturer at the Ballarat School of Mines.  I was one of the Days’ “Asian students” and part of their extended family. A wonderful family with their three children.  Mrs. Day was the first ‘Mum’ I knew who could stand on her head in a yoga pose. Now Mr. and Mrs. Day kissed each other and everyone as a way of greeting and farewell. After Mr. Day’s kiss landed on my nose instead of my cheek during my first visit to their warm and welcoming home, I tried to avoid this rather alien form of greeting and farewell whenever I could. I employed certain tactics of avoidance without being seemingly rude. This included averting my face to one side each time his be-whiskered face drew near, but that was not such a neat tactic as more often than not, his kiss would land on places such as the left side of my nose or an open eye. Now an open eye receiving a smacking kiss is something to be experienced. Another time, the kiss landed on my right ear.  However, nothing could compare to the evening when I stepped  backwards swiftly as Mr. Day bent down to plant a kiss on my cheek to bid farewell. I landed in a ditch!

Using my waist long hair as a curtain was also good at shielding his whiskers tickling my cheek. So hair to hair, we would do battle in my induction into some of the more visible aspects of  ‘Western’ culture. Over the years (i.e. 40 years) I got used to the social kissing that ‘Westerners’ engaged in. During this period I also got to wondering what was it that caused my initial aversion to the social kiss from Mr. Day, whose avuncular style endeared him to me greatly. To this day I still remember that man whose heart and home were always open to us Asian students and whose loving wife introduced me to headstands when I was barely nineteen years old.

My contemplation on why I felt such discomfort by the social kiss finally led me to the old man Confucius. He was to be blamed for this, I’m afraid. Being born and sprung up as a Confucius child, part of my unconscious culture demands no touching. As a young 20 year old (or was I then 19 when first upon my cheek a kiss was planted by a grown man). By the time I was 5 or 6 years old, no man, not even my father would have shown any physical affection. Perhaps a pat on the head, that was all. But a kiss! Confucius forbids!

Confucius had taught that part of the process of attaining perfection as a human being is to suppress all emotional display. So no touch, no verbal praise, not even a blatant look of pleasure. As a result, children brought up in the Confucian tradition consciously or unconsciously imbibe the notion that it is inappropriate to show any feelings no matter how sad or happy. Girls are to giggle behind their hands should laughter arise involuntarily. Tears are to be shed in the heart thus the imperative “to swallow bitterness” in order to inculcate the ability to endure suffering, the fate said to be of the female condition.

Out of a culture that prohibits the open display of human emotions come the language of silence and indirect communication. It also gives birth to the stereotype of the “inscrutable Chinaman”. Perhaps Confucius was trying to train us to win at all poker games. A more interesting implication that flows from this Confucian dictum of no show of emotions also meant that the incest taboo, universal in varied cultures, is particularly enforced in Chinese households unwittingly. If fathers and daughters are so strongly prohibited by tacit cultural imperatives of no physical contact, it would seem a Herculean task indeed to try and commit incest. In fact studies have shown that when one correlates ethnicity and incest, we Chinese are pretty clean. In fact our incest taboo is so strongly enforced that people of the same surname are prohibited to get married in the old days. 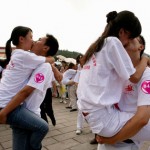 So two Wongs do not a marriage made. Never mind if one Wong comes from Canada and the other from Jamaica. If they are Wongs and the written character is the same, ‘hello young lovers’ had better be zaijian lovers.  We claim kinship as soon as a common surname is established so Jeff (poor boy) acquired a sister in Loo-See because she is a Lai even though she has hyphenated her name I may add for an obvious reason; not dissimilar to my tour guide who claimed to be Lui but renamed himself quickly to Leo when he discovered that we Aussies in his bus refer to the place where we do our unmentionables by his name if pronounced with the wrong tone.

All this leads me back to the central topic of this editorial and that is do we Chinese kiss? It all depends. If the kiss is erotic, yes we do (we are lusty sexual beings, are we not?). No, if the kiss is social. We do not even shake hands in greeting and farewell. That is a Western custom. We used to clasp our fists together and shake vigorously facing the one to be honored. These days we just nod our heads and smile. And if we have to cross over to ‘Western cultures”, we will take your offered hand and shake it. But no kissing please.

18 responses to “Do Chinese Kiss?”